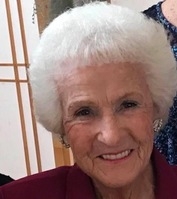 I was born Betty Phyllis Lisle to Charles and Julia (Taylor) Lisle on November 06, 1928, in Ekalaka, Montana, the 4th of 9 children. Because of draught and depression, we lost the farm and in 1934, when I was 6, my parents, me and my siblings Laverne, Emmett, Zoe, Kenny, and Clayton, packed up our dog Shep and everything we owned and moved to Caldwell, ID. After a year, we moved to California to be closer to my grandmother and my uncles. My Dad and brother Emmett helped in the hay fields and the rest of us picked olives to keep going. After a few years, we moved back to Caldwell and lived on Mr. Crookham's farm where we helped raise cows, pigs, chickens, and rabbits and tend a big garden. These years also brought my brothers Carl and Dale and my baby sister, Yvonne. I attended 2nd through 9th grades in Caldwell and then we moved to Middleton, Idaho. In Middleton, I remember being able to earn a whole dollar for each babysitting job, which was usually from 7pm to 1am. I worked at Swifts candling eggs that were frozen and sent overseas to the servicemen. For a time, I also worked as a waitress in a café on Main Street - it was the first time I owned a store-bought dress as my entire life, my mother, a wonderful seamstress, had made all our clothes, which we were proud to wear. My family also continued to work the fields - we hoed beets with short-handled hoes and picked hops by hand for Mr. Batt in Wilder and we picked peas, cherries, peaches, and plums all around the area. I finished my sophomore and part of my junior year in Middleton before moving to Parma. I made lifelong friends in Middleton, so it was a difficult transition.

In Parma, I finished my junior and senior years in high school and graduated in 1946. During this period, I also met the handsome neighbor boy, Bob Hopkins and our first date was to the Caldwell Night Rodeo. We were engaged July 4th and married in Olympia, WA on August 17, 1946, with Don and Betty Johnston as our witnesses. We moved onto a 90-acre farm east of Parma where we were able to make a good living. Our first son, Robert Charles, Jr "Bobby" was born April 13, 1950. When he was a year old, we moved to Wilder, ID and James Philip "Jimmy" was born about a year later. Our third son, Danny Russell "Danny", was born on April 1, 1955, and we finally got our little girl, Penny Renee, "Penny" on November 4, 1957.

When Penny was a year old, Bob and I bought an 80-acre farm in the Ten Davis Community just east of Parma. Bob and the boys milked cows, raised pigs and chickens, and did all the farming. We raised hay, grain, corn, and sugar beets. In 1968, I went to buy flowers at Fangan Floral and ended up with a job on the spot! Bob semi-retired from farming in 1973 when we bought the flower shop and named it Flowers by Betty. I delighted in training and working alongside my daughter and daughters-in-law, Marcia, Janice, and Debbie. Bob was my #1 delivery man with our grandchildren helping as only grandchildren can do. Bob enjoyed planting and cultivating the greenhouses - we were a great team! We loved meeting and serving hundreds of friends and customers over the years. In 1992, we transitioned the shop to Dave and Penny's ownership and continued to serve with them in any way we could on into our 90s. We were big BSU fans and celebrated many a game at my beloved granddaughter's home! Going to rodeos, especially the Caldwell Night Rodeo which we attended faithfully for near 70 years, traveling with the Good Sams, vacationing with my husband and family, and attending reunions were true highlights in my memories of a life well-lived. And then there are my 8 grandchildren, 18 great grandchildren, and 8 great-great grandchildren with two on the way. Oh, how we love them. They filled our later years with much entertainment and delight.

Additionally, there is my extended church family. I have been an active member of Golden Gate Baptist Church for over 70 years and have found great comfort in our longtime friendship and fellowship with the Wilder community.

I am preceded in death by my sisters Laverne and Zoe and my brothers Emmett and Dale. My precious Bob and I were married 73 years and 9 months when he passed away at the age of 95 on May 7, 2020. I am survived by my four children, their spouses, and their families: Bobby and Marcia Hopkins, Jimmy and Liz Hopkins, Danny and Debbie Hopkins and Penny and Dave Poppinga. I love each and every one of you . . . As I write this, I am 92 years old and have terminal cancer. I am at peace with this because of my faith and my belief that I will leave this earth for a much better place. God is good and faithful...all the time!